Bhaktivedanta International Gurukula and Varnasrama College (BIGVC) is an institution situated at Hare Krishna Village,Tonk(Rajasthan) and is dedicated to Śrīla Prabhupāda’s vision for ancient Vedic education and gurukula system as it is, in order to create a society where people understand that doing pure, unadulterated devotional service with the aim of returning home, back to Godhead, is their primary profession in life, educational programmes strive to fully reorient student's cultural perspectives.

Srila Prabhupada wrote in a letter to Satsvarupa on 21 November, 1971: “The old system of gurukula should be revived as the perfect example of a system designed to produce great men, sober and responsible leaders, who know what is the real welfare of the citizens.”

The Vedic education system is based around the cultivation of a child's character, skills and knowledge, keeping at the forefront the individual child's inherent nature. So therefore this institution is our little attempt to train some boys to become first-class character. Samo damo titiksa which is required in the society.

The youngsters are raised in a rural setting with a "Simple living and high thinking" lifestyle and set of customs. We at BIGVC are dedicated to train the child so that he develops all these good qualities and becomes a devotee of Krishna by following Srila Prabhupada‘s instructions of rising early in the morning, attending mangala arti, chanting, reciting shlokas, taking bath at least twice, obedient to parents, elders, guru and Krishna.

Srila Prabhupada: By practice. We are training them to practice how to become devotees. By superficial seeing the activities of Krishna, this is not... One has to practice.

Initially the child is given temporary admission for 6 months. If the child gets well adjusted, then permanent admission is given. Therefore in the Vedic civilization the children...

But, on the whole the Gurukula standard should be free education, boarding, and lodging. People shall voluntarily contribute as far as possible. - Letter to Mohanananda

Whatever the elder members are doing, the children should do if possible. But for teaching the teachers themselves should be fixed up initiated devotee. - Letter to Aniruddha

I am very glad to learn that you are enthusiastic to teach the children. Most of your questions I have answered as above to Satsvarupa. Simply follow the program of the

Whatever the elder members are doing, the children should do if possible. But for teaching the teachers themselves should be fixed up initiated devotee. - Letter to Aniruddha

Srila Prabhupada’s Quotes related to the question under consideration:

By practice. We are training them to practice how to become devotees. By superficial seeing the activities of Krishna, this is not... One has to practice. Just like we are going to start…Gurukula means practice. ―Brahmacari guru-kule vasan dantah” [SB 7.12.1]. How to become self-controlled, danta.That is the... So our mission is to awaken the original consciousness, and that can be done by practice. Without practice, it is not possible - Morning Walk - August 14, 1976, Bombay

Vasan danto guror hitam. The word is used, danta. Danta means sober. Children are generally restless, and the brahmacari-asrama means to train him how to become peaceful. That is the first training, not that to make him very good scholar in grammar. It is not said there. That is later on. First thing is how to make him sober. - Evening Darsana - February 26, 1977, Mayapur

Prabhupada: But if you have to work under government regulation, then you cannot do it. You won't get government help.

Indian lady: But I want to convert it into Gurukula on the basis of Hare Krishna consciousness.

Prabhupada: Our gurukula means how to teach them to become self-controlled. That is first business. This literary education secondary, grammar secondary. The first necessity is how to create them santa, danta, self-controlled.

Indian lady: But we have got from Punjab Board and education board...

Prabhupada: And therefore I say, if you have to work under government control, it is very difficult. If you can work independently, then it is possible.

Prabhupada: No, if you take government help...

Indian lady: But the students go for examination in the board also.

Prabhupada: Therefore, if you want to satisfy the parents, the government, then it is not possible. You have to satisfy Krishna.

Indian lady: They have to go in colleges.

Prabhupada: I know that. Therefore I said that if you have to satisfy so many masters, it is not possible.

Dr. Patel: At the most she can give some sort of a cultural education along with those programs.

Prabhupada: What that cultural...? If he does not practice, what is that culture? It is practice…

Indian lady: Christian has their own government schools everywhere. And we can have our own Krishna consciousness school.

Prabhupada: Yes. We are having our own all over the world. We don't follow the government regulations

If they simply learn to rise early, cleanse, all hygienic principles, their study will be greater than any government program. Whatever the elder members are doing, the children should do if possible. But for teaching the teachers themselves should be fixed up initiated devotees, otherwise how the children can get the right information and example? - Letter to Aniruddha - Calcutta 7, March, 1972

Prabhupada: Yes, any education, from childhood. Yes. Education means from childhood. Hare Krsna. Kaumara acaret prajno dharman bhagavatan iha [SB 7.6.1]. The... How... We are getting so many sannyasis, they should teach. Teaching should be done by the sannyasis. Just like in missionary school, the fathers teaches. - Morning Walk "Varnasrama College" - March 14, 1974, Vrindavana

These are the different steps, how one person can become civilized. So first thing is tapasa.Tapasa brahmacaryena [SB 6.1.13], austerities. Therefore in the Vedic civilization the children, they are taught from the very beginning brahmacarya. Tapasa brahmacarya.A small boy, five-years-old boy... That is gurukula. Brahmacare gurukule vasan danto guror hitam [SB 7.12.1]. This is a way of life, to teach the brahmacarya, brahmacarya, celibacy, to restrain from sex life. That is brahmacarya. So this is the beginning of civilization. - Lecture on Srimad-Bhagavatam 6.1.12, Honolulu, May 13, 1976

Bhaktadasa: Srila Prabhupada, there was one question. They would like to know why is it that the children are separated from their parents and sent to Gurukula?

Prabhupada: And what is the benefit of remaining with the parents to become hippies? For training. We are trying to train first-class men. So if, from the very beginning of life, one is trained... That is the Vedic civilization. Kaumaram acaret prajno dharman bhagavatan iha. "One should be trained up to become God conscious from the very beginning of life," kaumara. Kaumara means after five years.Up to five years the children may have all freedom. Whatever he likes, he may do. But when he is five years old, he must be under training.That is the old system. Gurukula means to send the boy, especially boy, not the girl, to be trained up at the place of the spiritual master or teacher. Just like what is that public school? They also send their small children to the public school. Montesori?

The basic idea of raising children as they are described in the Vedic literature is that from birth till the age of 5 yrs the parents may be very lenient with the child. From the ages 6 to 10 they should tighten the discipline of their child, and from the ages of 10 till the 16 yr. the parents should be as strict as a tiger with their child so that he will be afraid to be disobedient at all. Then after the 16 yr. the parents shall treat their child as a friend, and the child is allowed to gradually develop his adult responsibility and independence - Letter to Vibhavati - Los Angeles, 15 July, 1969

And as soon as he is on the fifth year, you must be very strict on the child, on the boy, so that he may not be spoiled. Very strict. Simply engage him in proper education. Tadayet dasa varsani.And prapte tu sodashakam varse.And as soon as he is on the sixteenth year...Sodashakam means sixteenth year. Prapte tu sadashakam varse putra mitravat acaret: the son, the boy should be treated as friend. No more punishment. Then there will be reply. So there must be restraint. - Lecture on S.B 7.6.6-9, Montreal, June 23, 1968

You should give all freedom to your child for five years, and then, next ten years, you should be very strict, very strict, so that the child may be very much afraid. And as soon as he attains sixteen years of age, then you should treat him like friend, not, I mean to say, so strictly." These are the moral instruction by Chanakya Pandita. - Lecture on S.B 7.6.1, San Francisco, March 6 1967 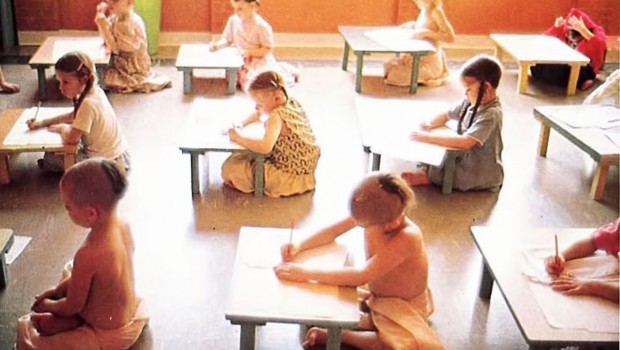